You are here: Home / 17 natural home remedies with ginger root

Ginger root is the root of a flowering plant that originated in China and is now a favorite for culinary purposes around the world. Ginger root contains a compound called gingerol, which is responsible for ginger’s several healing abilities. Ginger is best known for relieving nausea, aiding digestion, and fighting colds. However, it has several more medicinal uses that make it an incredibly versatile home remedy. Best of all, you can find it fresh in any grocery store produce section.

Many people enjoy the taste of ginger as a spice, a flavor in sweets and baked goods, and as an aromatic tea. However, you can also take ginger root powder in capsules if you’re not a fan. Here are 17 different ways you can use ginger as a natural home remedy. 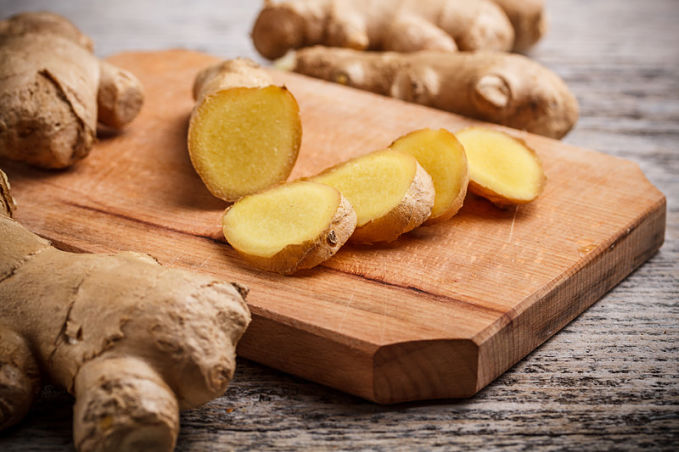 With its anti-inflammatory, antimicrobial and pain reducing properties, ginger can help treat a sore throat.

Steep grated fresh ginger root in boiling-hot water for three to five minutes. Strain, mix in some honey to taste, and drink it warm to relieve throat pain and kill germs when you’re sick.

Ginger is an abundant source of immune-boosting antioxidants. It also has an antimicrobial and detoxifying action, which keeps your body clean to ward off infections.

A 2008 study published in BMC Complementary and Alternative Medicine found that ginger activates T-cells in your blood, which are the white blood cells responsible for killing viruses and protecting you from diseases.

To protect your immune system during flu season, drink a cup of ginger tea each day.

Ginger reduces inflammation and pain, boosts circulation and flushes toxins out the muscles so that you can recover sooner.

If you want to avoid caffeine crashes, try drinking ginger tea in the morning instead.

Ginger, its oil often used in aromatherapy for its stimulating and energy abilities, increases blood flow, which in turn boosts oxygen levels in the body and ultimately leads to better energy.

Chew on ginger candy before a test, or drink ginger tea for an afternoon pick-me-up.

Adding a few drops of ginger essential oil to a diffuser and inhaling the aroma also energizes the mind and improves concentration.

Ginger root has traditionally been a remedy for nausea, and research has proven its effectiveness. Pregnant women with morning sickness can try chewing on ginger candy or sipping on iced ginger tea to relieve symptoms.

Ginger has carminative abilities, meaning it breaks down gas in the stomach and intestines, to relieve bloating and pain caused by excess gas.

Take a ginger capsule when you experience gas or indigestion, or drink a strong cup of ginger tea for fast relief.

Candida is a parasitic yeast that naturally inhabits the human body. However, with an unhealthy diet among other factors, you can experience Candida overgrowth.

Ginger effectively kills Candida, so taking it every day can keep high Candida populations at bay.

For a Candida cleanse, use a juicer to juice an inch of ginger root and half a lemon, and add the resulting juice to a glass of water. Drink this tonic once a day in the morning before food to kill Candida.

If you frequently experience stomach ulcers, ginger can help prevent them and inhibit their formation.

When you feel a stomach ulcer coming on, then drink warm ginger tea with honey. Avoid drinking it hot or on an empty stomach.

Continue drinking this tea or taking ginger in capsules until your symptoms subside.

Whether you suffered a sprain or you’re dealing with a chronic illness that gives you joint pain, ginger can help.

Research has shown that ginger relieves pain in people with rheumatoid arthritis, osteoarthritis, and psoriatic arthritis.

You can take ginger internally for pain relief, and you can rub ginger essential oil (diluted with a carrier oil in equal parts) topically onto your joint.

The compound in ginger called gingerol has powerful anti-inflammatory effects, which not only helps reduce pain but also bring down swelling and promote faster healing.

Add 2 cups of strong ginger tea to a hot bath and soak in it to reduce swelling of your feet, legs or other body parts.

Taking ginger internally also reduces inflammation, including that of bowels. Because of these effects, ginger can help alleviate symptoms for people suffering from autoimmune diseases such as Crohn’s, inflammatory bowel disease and ulcerative colitis.

Research studies on both rodents and humans have found that ginger root significantly reduces levels of both LDL cholesterol and triglycerides.

Taking it as a daily supplement, in addition to maintaining a healthy diet, can protect you from high cholesterol and the high risk of heart disease associated with it.

Although more research is needed, studies thus far have shown that the compound gingerol found abundantly in ginger root has an anticancer action against cancer cells in the body.

Studies suggest it may be effective in preventing and even reversing the proliferation of breast cancer, pancreatic cancer, and ovarian cancer.

By increasing circulation and thinning your blood, ginger has the potential to relieve headaches and migraines.

Try sipping on a strong cup of ginger tea or taking a ginger capsule next time you get a tension headache or migraine.

Ginger root has been found to lower high blood sugar levels and reduce the risk of heart disease in people with type 2 diabetes due to its lipid-lowering effects.

A 2012 research study found that ginger inhibits enzymes that affect insulin sensitivity and enables increased absorption of glucose in the muscles. This is good news for people who experience blood sugar spikes.

Try drinking ginger tea with meals and choose ginger candy as an alternative to other sweets.

Ginger root is a natural blood thinner. This action, combined with ginger’s anti-inflammatory effects, works to prevent high blood pressure and lower it.

Taking ginger as a daily supplement could be beneficial for anyone who experiences high blood pressure, but be sure to check with your doctor first if you’re taking any blood thinning medications.

If you’re taking aspirin to keep your blood pressure in check, ginger root capsules may be an effective replacement for it. In fact, ginger has often been called, “nature’s aspirin.”

Being “nature’s aspirin,” ginger can also relieve pain associated with menstruation. When it’s your time of the month, your pelvic area gets congested with increased fluids.

Avoid drinking caffeinated products, as it can cause dehydration and worsen menstrual symptoms. Replace coffee with ginger tea while you’re having your period, and it’ll save you a lot of pain.

Because of its versatility as a natural home remedy, it’s a good idea to keep fresh ginger on hand at home for your family.

You can use it whenever you get sick, experience headaches, gas pains or many other common ailments.

Find ways to incorporate ginger into your diet by using it in recipes for an extra health boost, or try juicing it in a juicer for a detoxifying therapeutic dose.