You are here: Home / 6 amazing herbs to relieve stress and anxiety

Here are 6 amazing herbs for anxiety and stress relief. The origins and history of each herb are described, along with their therapeutic properties and traditional uses as well as instructions on the best ways to take them individually and in conjunction with other herbs.

For most people, life-changing events often come with a great deal of stress and anxiety and even minor everyday challenges can easily make you feel overwhelmed. Natural therapies can help you ease mental tension, stress, and anxiety, while nourishing the whole body. The following herbs are great for dealing with these issues and so you can enter a calmer, more focused state of mind. 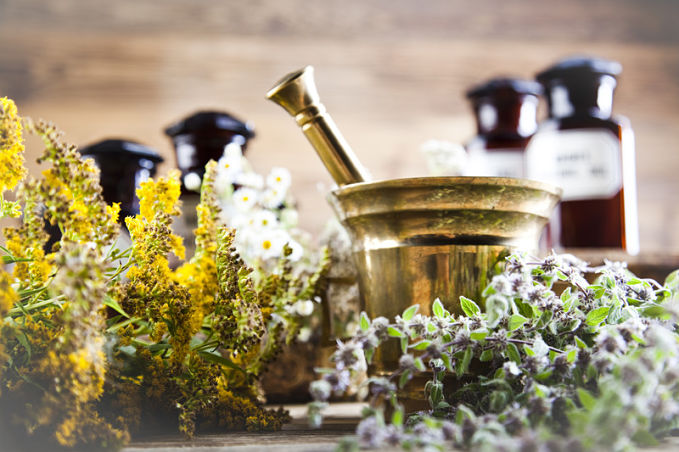 Herbs for anxiety and stress relief

A popular adaptogenic herb in India, ashwagandha has been used for thousands of years. This wonderful herb is both calming and energizing. It helps the body deal with stress, anxiety, and depression. It also enhances physical stamina, increases energy levels, and helps with sexual problems. It nourishes the brain, enhancing mental function and boosting memory, concentration, clarity, alertness, and focus. What’s more, this potent Indian healer, battles debilitation, tones the nervous system, and promotes a general feeling of well-being.

Scientific studies also suggest that ashwagandha may counter immune suppression caused by chemotherapy or radiation therapy. It also seems to promote stem cell growth, which, in turn, boosts white blood cell activity. You can take ashwagandha by itself, but also use it to many herbal combinations. It goes well with spicy herbs such as ginger and cinnamon. You can also add it to a chai blend of your choice, or take it in tincture or capsule form.

This unassuming, small, gentle plant is actually a powerful healer widely used since antiquity. Chamomile is the go to herb for treating children and babies. Its also safe to use during pregnancy and nursing, as well as for long-term use. It treats a variety of complaints including stomach issues, colic, infections, and nervous stress. A warm cup of chamomile tea is the best thing to drink after a particularly stressful experience. What’s more, It can help you relax and prepare for sleep.

This amazing herb contains azulene, an essential oil that has the ability to reduce inflammation and bring down a fever. Furthermore, the bitter compounds of chamomile can aid digestion. It is suitable for everyday use and its benefits will have a lasting effect if taken regularly. You can blend chamomile with other nervine herbs or use the essential oil of the plant.

A native to the warm tropical regions of the planet, kava has had both ceremonial and medicinal uses. Traditionally, this herb helped solve arguments and promote peace and cooperation between individuals and communities. It took quite a bit of time for kava to reach the rest of the world and it is often said that Captain James Cook discovered it while sailing through the Pacific region.

This fantastic herb owes its very useful properties to its main active compounds, the fat-soluble kava lactones (kavapyrones). Kava has the ability to ease the body and energize the mind. It also improves awareness and concentration and boosts your mental powers. It works as an analgesic, muscle relaxant and nerve toning while it reduces stress and tension. Clinical trials conducted in Europe have suggested that this herb can be useful for the treatment of nervous anxiety, menopausal and perimenopausal anxiety, generalized anxiety disorder, and insomnia. Moreover, in comparative studies, kava extract and kavain worked similarly to benzodiazepines, drugs often prescribed to treat anxiety disorders.

This is one of the most versatile plants in existence. Calming, relaxing, but also uplifting and fortifying, lavender has a long history of use. In ancient Greek and Roman times, women held springs of lavender during labor to calm and give them strength. What’s more, it was used as an antiseptic in ancient sick rooms and hospitals. Later traditional use includes scenting bed linens and protecting clothes from moths.

This wonderful herb can help with tension, stress, pain, headaches and migraines, insomnia, as well as melancholy and depression. As a nerve tonic, it creates a general sense of well-being. In clinical trials and observational studies, inhaling ambient lavender essential oil appears to reduce anxiety, induce relaxation, and improve mood and concentration. This plant is also a potent antifungal, antibacterial, and antiseptic agent with numerous applications. You can use it as a tincture, tea, in salves, and baths. Try a lavender herbal bath after a long, stressful day or inhale some lavender essential oil before bed.

Passionflower is a gentle and relaxing herb with a long history of use in South America, where it has treated a variety of ailments such as epilepsy, anxiety, insomnia, and panic attacks. Legend has it that the flower got its name because its corona resembles the crown of thorns worn by Jesus Christ during the crucifixion. It’s also worth mentioning that this herb was a popular sedative in the early 20th century and the United States National Formulary listed passionflower up until 1936.

This is one of the best herbs for anxiety and depression. It is rich in alkaloids and, and works effectively against imbalances of the nervous system. Passionflower soothes tension and anxiety while dealing with stress-related symptoms such as elevated blood pressure. It can also help deal with a nervous stomach. This amazing herb is an analgesic and antispasmodic, and it can treat headaches, menstrual cramps, pain, as well as muscle spasms. The leaves and flowers can be combined with other plants that promote restful sleep, like valerian root or skullcap. You can add them in tea blends, tinctures, or try some passionflower capsules.

People traditionally gathered this yellow flower to prepare for the feast of Saint John the Baptist. The word “wort” is actually an Old English term for “plant”. St. John’s wort, however, has been used since antiquity. In ancient Greece, it was believed to banish evil spirits from the body. Since then, it has been widely used in Europe to treat neuralgia, neurosis, anxiety, and depression. In Germany, this herb makes up for about a quarter of all antidepressant prescriptions. Its popularity increased in the 1990s, and it quickly became the “happy herb” of the decade.

Herbalists often recommend St. Johns wort for stress, mild depression and anxiety, fibromyalgia, seasonal affective disorder, nervous disorders, insomnia, and chronic fatigue. Although there is a lot of research regarding this herb, it is still unclear which chemical compounds are actually responsible for its antidepressant properties. Nonetheless, St. John’s wort can ease mild to moderate depression, but works best in conjunction with other holistic therapies. It can also be blended with other herbs to enhance its benefits. For instance, combined with passionflower, it is one of the best herbal treatments for anxiety and stress.

Herbal remedies can help you create a calmer, less stressful life for yourself. You can use these herbs individually or in combinations, and, of course, along with a healthy diet, regular exercise and proper sleep. They can also be taken alongside conventional treatments. However, you should always remember to respect their potency and follow the recommendations for each herb.

Gladstar, Rosemary. Herbs for Stress & Anxiety: How to Make and Use Herbal Remedies to Strengthen the Nervous System. Storey, 2014.